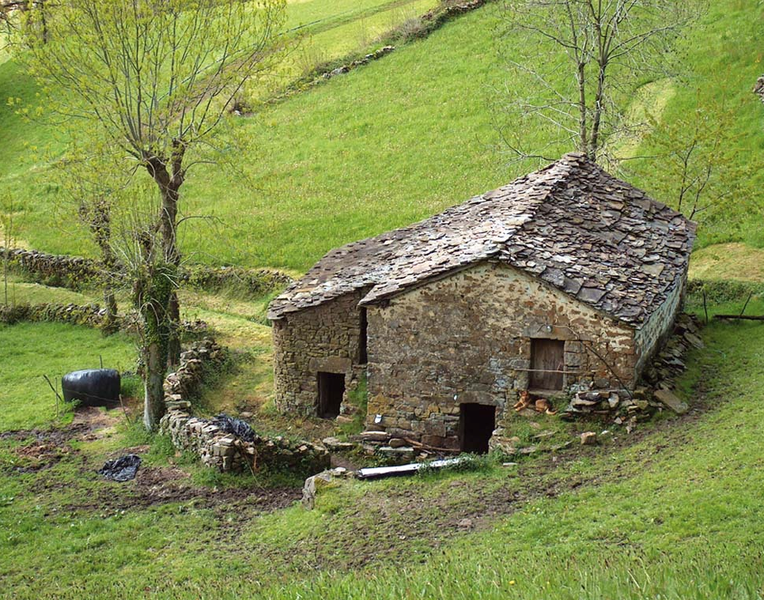 Until our days have been preserved the Pas cottages, typical of these valleys constructions with a unique structure and differenciated from mountain buildings in the Cantabrian mountain range, and specifically in those areas in which economy is based on livestock farming and the rural life.

Pas cottages have two stores, one of them destined to cattle, the lower one, and the other one for family life, in a higher floor. In the Pas Valley are about 800 documented cottages in good preservation state, and some of them are still being use by farmers in the area who perpetuate the traditions inherited off of their ancestors. Customs that are not lost thanks to the strong foothold of their inculcation generation upon generation. The isolation is another of the factors in the perpetuation of these traditions, since the little contact with the rest of the world by staying in high altitudes helps to maintain the same usages and customs from so many years ago.

Precisely one of these customs is intimately linked to cottage tradition. The “muda”. During summer, the neighbours move their cattle to mid-mountain pastures until the arrival of cold weather, which forces them to return to the valley bottom. Following this procedure, when the grass of a plot is exhausted, the Pas farmer moves to another plot in which there also is a cottage, moving their belongings, family and cattle.

Because of this, the Pas family group is merged in the totaliy of their cottages and pastures. Pas territory belongs to a socio-cultural profile in which the individual prevails, the private from a territorial construction point of view. Cottages and cottage groups have a physical reality but lack a direct social transcendece.

The three Pas villages San Roque de Riomiera, San Pedro del Romeral, Vega de Pas and also the municipality of Selaya, in Pisueña Valley, are a good example of this landscape metamorphosis forged by humans. In these zones are concentrated the most interesting, wide and building density cottage groups. In their corners exist may cottages, most of them “vividoras”, as can be perceived by the quantity of paths and trails (some of little accessibility) that attest for a spatial organisation. Also to be pointed out, the presence of “Cuvios”, plots of reduced size that were used as pantries or coolers to preserve food, milk, cheese, butter… and even to cream the milk with which they later would prepare dairy by-products.