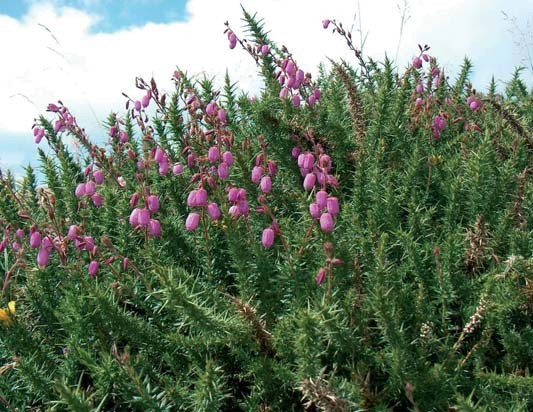 Vegetal landscape in the Pas environment

The vegetal landscape in the Pas environment is good for showing the diverse effect of human intervention in nature. The forest history, brief regarding biological and climatic evolution, is splashed, since the moment in which a permant settlement of human groups is done in the territory, with continuous phnomena, prone, in most cases, to its deterioration, replacement or eradication.

In spite of everything, the region keeps such a singular natural heritage, that made it worthy of the inclusion of great territory portions in the Red Natura 2000.

The Iberian Peninsula is nowadays divided in two bio-geographical regions: the Mediterranean and the Euro-Siberian, that are distinguished by the differential existence of determining vegetal species and by certain landscape and bioclimatic characteristics. The Pas Valleys region is located inside the Euro-Siberian Region, that extends itself along the Atlantic coast. It is defined by the dominance of vegetal species of circumboreal distribution, in the case of the Iberian Peninsula due to mid-European flora elements, boreo-alpine, Euro-Asian and sub-Atlantic, as well as some Iberian endemisms. The forests present a deciduous strategy, related to the overcoming of a cold winter, that is the most unfavourable aspect, as well as the existence of a dry summer period, showing a rainfall distribution more regular along the year than in the Mediterranean Region, that shows a marked period of summer drought.

Most of the region is distributed between the bioclimatic levels of hill and montane, leaving the subalpine level represented only, and as a small station, in the peaks of the Valnera rock mass. The preponderance of the hill level implies the hegemony of low-zone and favourable weather vegetation, like the oak grove of Quercus robur, now in colonisation phase by the European beech (Fagus sylvatica) in the areas with a most favourable substrate and topography for this species, as well as heaths characteristic of low zones, formed by a wide variety of heather species. Also should be mentioned the existence of wide grass and pasture areas, especially in riverside and smooth hillside zones, and the notable development of mixed riverside forests in the mid-stream of the three Pas rivers and their tributaries.

The climatic and edaphic conditions, and the relief forms stablish the characters of the vegetal identity in a space. Without other intervening aspects, the region would be completely covered by this forestal formations, but men labour has made the vegetal mosaic sustantially vary from the potential vegetation.

Oak groves and mixed leafy forest surely are the most characteristic formations from the basal and montane levels of these valleys and of the peninsular Atlantic zone. In this position, by occupying very reachable altitudinal heights, on deep soils, rich in nutrients and permanently damp, have always stablished a competition with farming and cattle farming usages that, normally, played against it, and therefore are very scarce the well preserved strongholds.

Deciduous species are characterised by their physiological strategy to develop a fast, summery vegetative cycle. They shed their leaves during winter, protecting their buds and dealing an energy waste that a priori could seem barely justified, due to the relative benignity of Cantabrian winters (although one must take into account that in mixed forests, along with deciduous, and especially in mild Northern areas of the region, are not unknown some evergreens such as laurel and holmoak). The presence of these forests in the Cantabrian coast is justified by the absence of a dry season and by the availability of always moist soil. To avoid the enormous damages that late frosting can cause, the adjust their vegetative period according to the photoperiod (light exposure time), and not according to heat quantity.

In the arboreal and mixed forest strata, that tends to reach the considerable height of 25 metres, live together a good number of species accompanying the oak: ash, chestnut, elm, maple, alder or lime tree are the most common. In the montane levels this forest enriches in woody species, joining in the birch (Betula alba), rowan (Sorbus aucuparia) and whitebeam (Sorbus aria).

Among the oaks, the dominant species in the region is the white oak (Quercus robur), while the sessile oak (Quercus petraea) barely appears, in isolated bottoms, being as well minor the presence of Turkey oak (Quercus pyrenaica). The arboreal stratum composition determines in each case the density and diversity of the bush vegetation.

The more heterogeneous is the tree canopy, and therefore more irregular are the cover and the leaf structure of treetops, the richer is the undergrowth. We find tree species such as grey willow (Salix atrocinera), Plymouth pear (Pyrus cordata), alder or glossy buckthorn (Frangula alnus), hazelnut (Corylus avellana), European crab apple (Malus sylvestris) and common hawthorn (Crataegus monogyna). The inferior horizon of the tree canopy is basically constituted by holly (Ilex aquifolium), a shadown tolerant species that usually regenerates under ancient oak treetops. And there where the oak is the protagonist we find common fern (Pteridium aquilinum), western gorse (Ulex gallii), and different types of heath (Erica vagans, E. cinerea, Calluna vulgaris), besides a herbaceous flora characterised by the presence of species such as common cow-wheat (Melampyrum pratense) and woodland germander (Teucrium scorodonia). In the herb layer are also common some nemoral plants like Hypericum androsaemum, Pulmonaria longifolia, Oxalis acetosella, or Anemone nemorosa and grasses like Deschampsia flexuosa or Brachypodium sylvaticum.

We can find beech trees in almost every place of the region, from the marine proximities to the zone next to the mountains of the divisory. It prefers shadow and humid orientations and does not find thermal constraints in this territory, because it is able to endure extreme negative values. It only shows sensitivity to late frosting, which can affect it during spring beginnings, when the first sprout, always around mid-April. To avoid irreparable damages and increase perspiration, it tends to create a thin fur that covers the underside of leaves in young trees. A beech tree can easily reach 30 metres, and is characterised by having a very developed root system with slightly deep roots and some secundary, shallower ones that recycle waffle nutrients and absorb shallow soil humidity. The leaves are of a light green colour, ribbed, very thing and marcescence in young specimen. Their fruit is very appreciated by the fauna, due to its high caloric value; they are trigone, with hard, glossy walls.