Miera river is part of this list from its headwaters (Oriental Mountain LIC) to its ending (Puntal Dunes and Miera Estuary LIC), with 395.53 ha in the municipalities of San Roque de Riomiera, Miera, Liérganes and Medio Cudeyo.

The most notable particularity of this river is that the mid-stage is almost non-existent with an open valley and a mostly smooth relief, this river throws 300 Hm of water per year through the estuary of Cubas.

The transition between headwaters and the low stage is done through a long narrow gorge formed in lime stone where alder and willow branches get stuck in the river before reaching the pastures of Liérganes, where the valley widens towards its sea opening.

The first stage of the river length is a steep slope. Between 800m and 400m in altitude, the river profile becomes slightly convex while going through the deep valley and resolving in San Roque de Riomiera, where the river starts its progressive emplacement, thanks to the intense fracturing of the ensemble and the softer ground. When it reaches 200 metres of altitude in Mirones, the river avoids the limestone forming the mass of Las Enguinzas, carving a narrow gorge with rapids and pools, finally turning west.

The main affluents are Valdició, coming from the mass of Porracolina and a limestone surrounding from the right, and Carcabal, coming south from Las Enguinzas from the left. 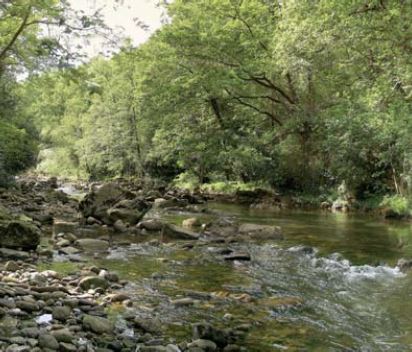