The spectacular relief of a middle Atlantic mountain: an open, flat-bottom valley.

It is Pisueña river who structures space and relief; who establishes the most fertile grounds and resolves community placement, which tends to be close enough to use its advantages and far enough to avoid its blusters. 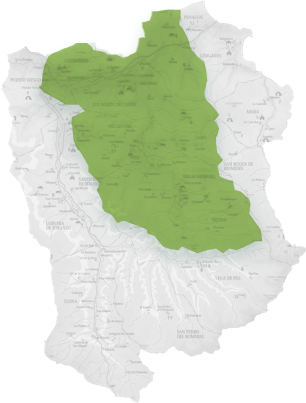 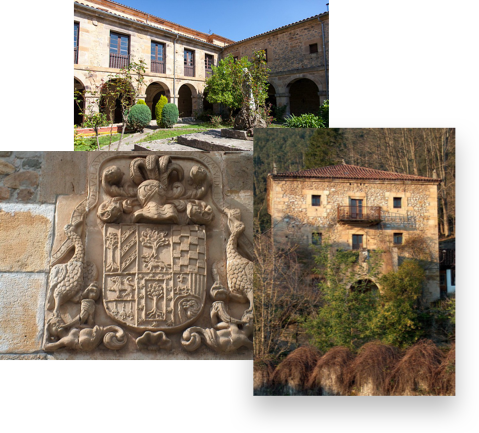 Valley ocuppation dates back to Bronze Age, to which belongs the well-known “Caldero de Cabárceno“, made around 1,000 a.D. Mining labour continued during the Iron Age, having an special importance after Roman conquest thanks to the proximity of Portus Victoriae (Santander).

In Medieval Ages, when territorial and social power was directed from abbeys, population centres began to appear looking for the monasteries protection. From the 12th century, free peasants entrusted themselves to secular nobility.

Pisueña Valley principal heritage are Pas cottages of farm use that appear all around. Are also to be mentioned the relevant secular and religious architectural heritage, like the Church of Saint George, the Colegiate Church of Santa Cruz de Castañeda and the Romantic Church of Saint Andrew.

Nuestra Señora de la Asunción is another architectural example of Cantabrian Romance, reformed during 16th and 17th centuries. Opposite of the Church of Saint Andrew, that belonged to the Ceballos lineage, the “Casona de Ceballos el Caballero” (House Manor of Ceballos the Knight) can be found, a worthy visit. 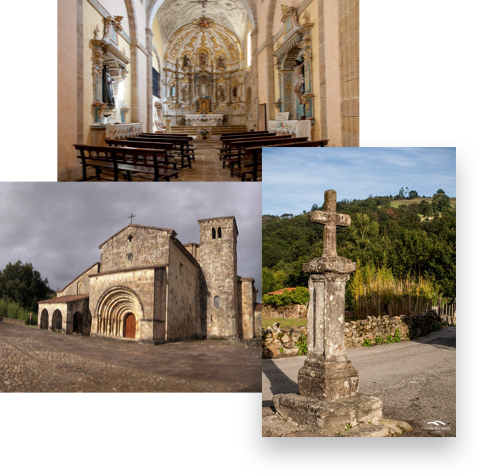 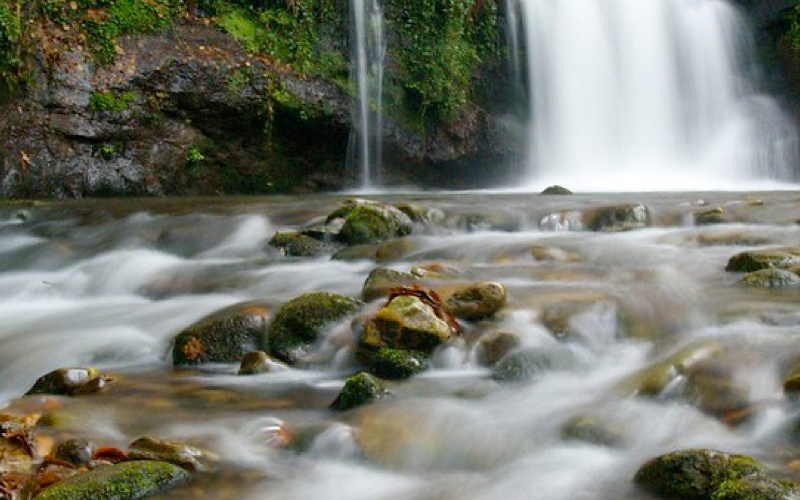 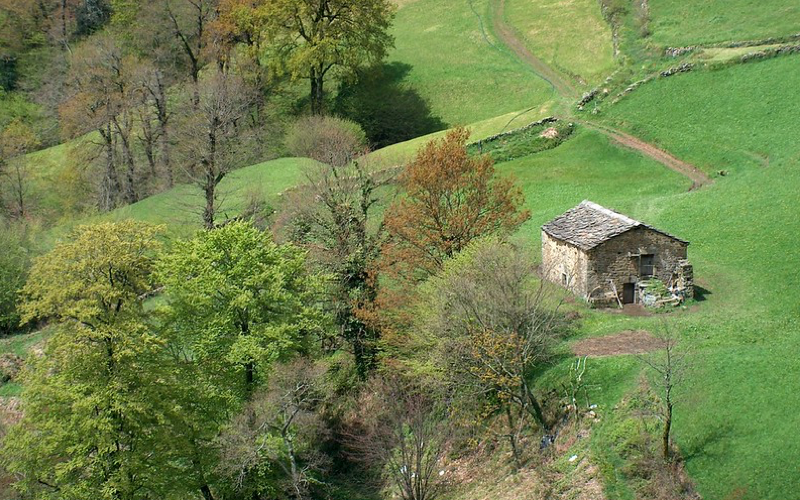 The the possibilities that the region offers to visitors when it comes to active tourism are plentiful: horseback riding, 4×4, quad biking and multiadventure routes, cultural routes and hiking routes.

Those who visit the region with sporty and cultural desires will find a great offer of  marked trails, between which are:

Other nice pathways are those that allow the visitor to get to know first-hand the cultural and architectural values of Pisueña Valley:

Summer is the moment of popular festivities and region revelry. From July to August, it is rare to find a day in which none of our towns reminisces its ancient traditions or celebrates in the name of its patron.

There is a plethora of rural sport competitions (truck cutting, weight dragging, rope pulling…) and Pas jumping. Not missing are “sobaos”, “quesadas” and traditional bowling. Traditional costumes are worn and the sound of the traditional clarinet and drum call town offspring, inhabitants or absentees, which usually are many in this land of migrants and expatriates.

Selaya delivers each 15 of August the most important date for Pas neighbours, the day of the Virgin de Valvanuz, Pas patron saint.

First fortnight of July, Folk Festival, one of the community’s most important festivals, takes place in Castañeda. September 1st, in Lloreda de Cayón, Saint Vincent is celebrated, with a singular prcession of floats and traditional costumes.

The first traces of human occupation in this valley have been found in Cabarga mountains, source of rich iron that has been exploited by natives since the Bronze Age. Between the remainders found, stands out the “Caldero de Cabárceno”, made around 1,000 a.D.

Mining industry became specially important during the Iron Age and after Roman conquest, thanks to the proximity of Portus Victoriae or Santander harbour.

First population centres did not appear until the Medieval Age, when peasants started looking for monastery protection. Since 12th century, free peasants fell to secular nobility in a feudal regime more tempered than in other Spanish regions, thanks to its “hidalgo” character.
During this period, some of most memorable Cantabrian history feats were written when peasants of Villacarriedo forced independence from feudal power.

Pisueña Valley keeps the expected relief of an Atlantic mountain: an open, flat bottom valley with hills in which are dominant the different green shades of harwood forestes and feeding or mowing pastures.

Where it touches the range, a relevant mountain cord can be seen. Main materials, mostly clay and sandstones, have allowed the river to move at whim. On its way are found the most fertile pastures and the main population centres. 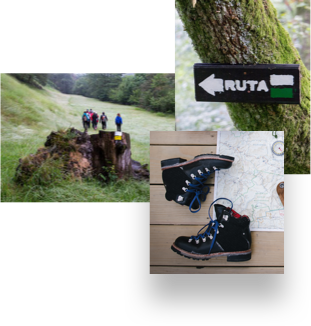 Cultural heritage of Pisueña Valley is seen in the numerous “montañesas” cottages, with their heraldic pieces, towers, palaces or magnificent balconies, all in a row. There is also a big representation of religious heritage, with style variety, standing out important samples of Roman architecture.

In Penagos can be contemplated the Church of Saint George, erected in 16th century on a pre-Roman construction that already worshiped Saint George and declared Cultural Interest Good in 1991. It has a sturdy squared tower from 17th c. and Gothic style. Parrochial Chruch of San Juan Bautista del Arenal, Church of San Pedro Apostol in Sobarzo, charming chapel of Santa Eulalia de Penagos or parrochial Church of Llanos, with a Renassence style entry, are excellent examples of religious architecture from 17th c. From the same stage, we have Palace of Miranda and the big shield on its front with Agüero and Miranda coat of arms.

In Castañeda, is worth a mention the Collegiate Church of Santa Cruz de Castañeda, declared Cultural Interest Good and enclave frecuented by the pilgrims of the Way of St. James. Santa María de Cayón has the Roman Church of St. Andrew, where a collection of sarcophagus from centuries 10th to 13th are kept. Two notable examples of Roman architecture are the Church of St. Michael of Carceña and Nuestra Señora de la Asunción. In front of St. Andrew’s church, which belonged to the Ceballos, we find the House Manor of Ceballos the Knight, built during 16th century.

On the way to Esles we find the Monastery of Saint Vincent of Fístoles and the Chapel del Ángel, in which a wooden Via Crucis begins to finish at the parrochial Church of San Cipriano. In Vega de Villafufre is located the plot of Felix de Vega y Carpio, father of great Spanish writer Lope de Vega, or the entry to the plot of Juan Montero de la Concha.

In La Canal is located the Palace of Don Domingo Herrera de la Concha y Miera, known as “el Convento”, good example of Classicist architecture. In the municipality of Saro we find the Palace of Gómez- Barreda, that follows constructive rules of manors with tower from 18th century.

One cannot go through Llerana without visiting the Church of San Lorenzo, of Gothic tradition, that was built in 17th c. on the remains of an ancient Medieval temple. In front of it is a slim tower finished in stone pyramid and balaustrade, where nowadays is the museum of Cantabrian expatriates.

In Villacarriedo we find the Palace of Soñanes, declared Cultural Interest Good in 1987 and considered the most important piece of Baroque in the area. Díaz de Arce, proyect developer, wanted the building: “…to be the most beautiful that art could be”, which masons in charge understood as an invite to looking for ornamental proliferation. The ensemble is completed with gargoyles and acroterias, like a forged iron balcony, with a big contemporary shield with the founder’s coat of arms and the Order of Santiago and a sundial.

In Selaya, the architectural reference is the Palace of la Colina or Palace of Donadío, that is built opposite of the most beautiful traitional bowling alley of Cantabria. The Sanctuary of Our Lady of Valvanuz,Pas patron, is a must-see, as well as the Ethnographic Museum of “Casa de La Beata”, where there is a permanent exposition about Pas wet-nurses.

Its irregular shape invites to walking through countless routes, such as the existing circuit from La Concha, Hayedo of Zamina and Picones of Sopeña. 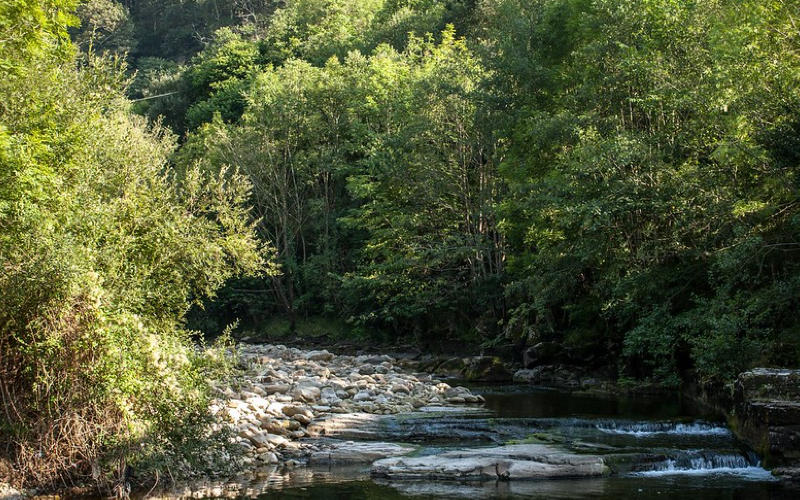 Pas Valley is defined by the way in which natural and man-made landscapes merge.